Blocking middle seats on airplanes would increase airfares by $87 –

Blocking middle seats on airplanes would increase airfares by $87 –

Delta and Southwest Airlines are both saying they will block middle seats through the month of September as added protection from COVID-19 for people who fly this summer. Other major airlines like United and American Airlines say that is a publicity stunt as even when middle seats are blocked you are still just inches away from people in front and back of you as well as less than two feet away from others in the same row. Several weeks ago IATA, and airline trade group, said that if middle seats were blocked by government order, the break-even ticket price on North American flights would increase by an average of $87.  I think everyone would prefer to have an empty seat next to them when they fly for comfort reasons alone. I also think the empty seat is a very positive psychological reinforcement for travelers. This big question is, are travelers willing to pay more for that extra space? I think business travelers who are spending the company money to travel will pay the extra costs of higher airfares. A family of four, however, may continue to look for the lowest prices. CLICK HERE for a great article about middle seats.

Airlines trying to sell miles like a used car salesman on the last day of the month – I have been getting all these emails from the airlines offering “double miles” for buying airline miles. The question becomes, “Are these a good deal”. The answer is MAYBE. Here is how I do the math. Today I received an email offering for me to buy 175,000 miles for $3062.50. If I redeem this at 25,000 miles for a free saver domestic ticket I am paying $437 for a roundtrip domestic ticket. Not bad but what happens if I can’t find a saver fare for 25,000 miles and have to use 50,000 miles for the ticket. Suddenly I have paid $874 for that ticket. Not a good deal. However, if you can use those miles and find an international business class saver ticket to Europe for 120,000 miles you have probably saved a couple of thousand dollars. Bottom line is that I really don’t think this is a great time to pay for airline miles as so much is up in the air right now with schedules, prices, etc.

Reopening the travel industry reminds me of watching Whack-A-Mole – Every week the travel industry gets more and more frustrating as the COVID-19 virus raises its ugly head again. In June things looked better as restaurants and hotels began opening while at the same time others closed. One week an airline adds flights, the next week they drop flights. Disneyworld announces opening, then delays, then opens again. It all reminds me of watching a video of the old carnival game Whack-A-Mole and how every time you think the virus is under control that it pops up its ugly head again. Watch this video and tell me it doesn’t feel like what you see on the news every night.

Southwest announces $49 OW airfare sale – The airlines have a lot of empty seats in August and they want to fill them up fast. Southwest is joining other airlines in offering an airfare sale to get you out of town. The new domestic airfare sale offers fares as low as $49 – $179 one-way. In order to get the lowest prices, you must book your travel by August 13, for travel from August 11 to December 17 domestically. You might have to be flexible with your travel dates to get the lowest fares. Call one of our friendly travel advisors at 402-435-8888 to help you find the perfect get-a-way.

In two weeks I am un-officially not able to travel outside of the U.S. as my passport expires in 6 months – As many people know most countries will not allow you to enter their country if you have a passport with less than 6 months left before expiration. I have circled July 27 on my calendar as that is six months prior to the date my passport officially expires on January 27, 2021. While the State Department has stated reissuing passports again there is reportedly a 2-3 month backlog of passports waiting to be processed. I feel almost naked not being able to travel internationally. However, currently, Europe won’t let Americans travel there and China and many other parts of the world are closed so I guess my anxiety is probably misplaced.

Did you know that in a normal year the airlines handle over 43 billion bags and 1,300,000 are lost and never claimed? – Turns out that bags that go unclaimed for 90 days are then sold by the airlines to a company in Scottsburo, Alabama who has an exclusive contract with the airlines to buy the lost luggage and sell it to anyone. Over 7000 items arrive each day into the 50,000 square foot showroom that is just about 140 miles northwest of Atlanta. CLICK HERE to read a great article about where your lost luggage probably ended up.

Here is an easy to use dashboard that shows what each country is requiring for COVID-19 travelers –  This dashboard is provided by IATA and contains a country-by-country listing of COVID-19-related public health requirements that passengers and airline crew need to follow. Obviously these rules are changing daily and you will always need to check with your friendly travel advisor before you travel anywhere.  CLICK HERE for the dashboard. 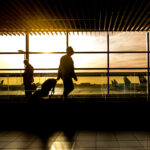